The team landed in Namibia last Friday without full knowledge of what the plans were for the week.  After a four hour delay in the airport because of visa problems with one of our team members, we were immediately ushered to a service already in progress.  Those services turned out to be a conference called “Understanding the Times” that lasted morning and night through to Monday evening.  From the conference, it was suggested that we would get into a van on Tuesday a.m. and travel 1000 km. to Northern Namibia, but God had other plans.

On Monday afternoon, Bishop David Nehemiah (overseer of the Pentecostal Assemblies of Namibia) took us to a boardroom in the Kalahari Sands Hotel in downtown Windhoek. What started out as a two hour meeting to discuss leadership structure in the Namibian Pentecostal Church, turned into two and a half days of what I have now called “The Namibian Summit”. 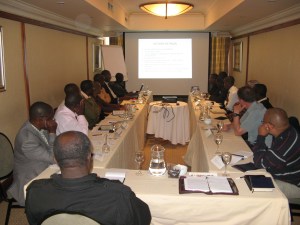 On Wednesday July 1, 2009 (Canada Day) at 5 p.m. (Namibian time) an agreement was drafted and signed by all in the boardroom (including myself) establishing a new executive and reconstruction of the current constitution.  RTC was honored to be an observer in what became a historic moment in the history of the Pentecostal Assemblies of Namibia and a literal “reinventing” of the church.

It is hard to believe that I will board a plane tomorrow that will eventually see me reunited with my family in Montreal.  I came to Africa three weeks ago with many questions about the future role of RTC on this continent but leave with the knowledge that it won’t be long before MJ and I will return to fulfill what God has called us to do – leadership development through a “reinventing of the church”.