When the party’s over…

This weekend, my father-in-law and I attended the NASCAR Nappa Auto Parts 200 road race here in Montreal.  Yes, I have been a NASCAR fan since childhood. 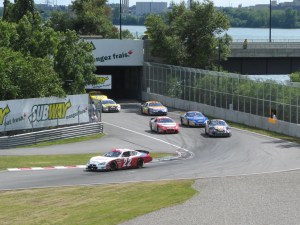 In between races, we walked around and collected all the freebee’s we could get our hands on – Armor All Wash and Wax, Shick razors and even Degree deodorant for men.  NASCAR is truly a man’s sport!!!!

I don’t know when I have been hit harder with the reality of life as I was this weekend.  There was no thought of God, other than the opening prayer at the race.   The only thought on people’s minds this weekend was – party!!!  Now don’t get me wrong, I am not against a good party, it is just sad to see a party void of God.  What hit me the strongest was the reality of what faces all of us when the party is over.  It is hard to describe, but I felt I was walking on the road to hell this weekend.  That road is paved with all kinds of pleasure.  Paul described it to Timothy this way:  “But realize this, that in the last days…men will be lovers of self, lovers of money, boastful, arrogant, revilers…without self-control…lovers of pleasure rather than lovers of God.” 2 Timothy 3:1-4

RTC talks a lot about change in the church but change must never come at the cost of speaking truth.  From time to time I hear it said that there are churches who don’t talk about hell anymore because it may offend people.  This weekend I rubbed shoulders with thousands of people who see life as an opportunity to enjoy the pleasure of sin for a short time, and boy did they enjoy it! But where does that road lead when life is over?????

The Nappa Auto Parts 200 was the longest race in Nascar Nationwide history with a lead change in the final corner on the final lap that led to a Carl Edward victory.  Here’s what he had to say about the race:  “It was wild, and I thought the whole time Marcos was going to get away with this thing. I broke away from Andrew, and I just gave it everything I had on that last lap, and Marcos just made that one mistake through the curves at the end and gave me the chance to get by.”

Marcus Ambrose, who led the race for 60 of its 75 laps said:  “I just made a mistake at the end there and lost the race,” Ambrose said. “Any other lap, any other corner, I would have got it straight back. It just happened to be the last corner of the race…”I feel pretty devastated, because I let my boys down. We came here to win, and anything less than that was a disappointment.”

Can I suggest that the church not make a mistake at the end of the race, especially on the last corner, by forgetting to tell people that hell is a real place?  Don’t let your friend, workmate or neighbor down by hesitating to remind them that there is eternal life to face at the end of the party.  Let’s give it everything we have on the last lap!!!!

P.S.  If you are enjoying these blog’s why not share it with a friend by sending them to www.rtc21blog.com