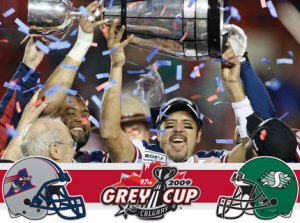 In football, the 13th man usually refers to the crowd and the intensity of their noise level that negatively impacts the opposing team.  The 13th man in last night’s Grey Cup game was not in the stands but in the end zone and his mistake brought the crowd to a deafening silence.

In what should have been the final play of the game and a Saskatchewan Rough Rider upset victory over the Montreal Alouettes,  instead became a devastating moment.  Television commentators suggested it will take the Rough Riders and their fans a long time to get over it.

The last week has been a journey down memory lane for me.  It was thirty years ago, November 22, 1979 that my brother and I received the devastating news that our parents had been tragically killed in a car accident.  Ironically, on the 30th anniversary of their death, I found myself in a church that my father used to pastor conducting a “Reinventing the Church” seminar at the exact time we had received the devastating news 30 years earlier.

This morning, as I reflected on last night’s loss because of the 13th man’s mistake, I was reminded of the 13th verse that has become a sustaining force in my life over the last 30 years.

“For I am the Lord, your God, who takes hold of your right hand and says to you, do not fear; I will help you.”

There are realities in life that are far more devastating than the loss of a football game.  In those moments, I am so thankful that I have something far greater to hold on to than the 13th man, I have the promises of God’s Word that have never failed!!!

Saskatchewan fans, the impact of your loss will be short-lived (easy for me to say as I live in the thrill of an Alouettes victory).  You will discover in life that there are things of far greater value than a Grey Cup which has received its share of bumps, bruises and dents.  Life itself is a precious gift from God.  Life in Christ is an even greater gift that has eternal rewards that will never fade, tarnish or dent.

By the way, Montreal Alouettes QB Anthony Calvillo, wears number 13.  In a post-game interview, he gave all credit to his Lord and Savior Jesus Christ. Huh!