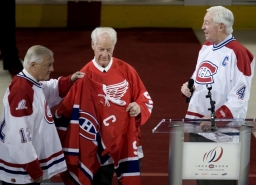 Whether you love them or loathe them, you have to admit that the Montreal Canadiens organization knows how to throw a party.

Our daughter Stephanie invited MJ and I over to watch the 100th birthday party of the infamous Montreal Canadiens.  What a night – swedish meatballs, pizza, dips, coffee & cupcakes –  and oh yah, a birthday party/hockey game all in one night!!!!!

Watching former greats like Dryden, Carbonneau, Gainey, Lafleur, Robinson, Roy and a host of others come on to the ice in full gear was an inspiring moment.  And then to listen to Gordie Howe introduce Jean Beliveau and have two of the finest gentlemen to ever play the game of  hockey, stand on the ice together was a memorable moment.

Of all that could be said of the birthday bash last Friday night, three things stand out in my mind.

First, I was amazed to see how an old, retired generation of hockey players could inspire a young, existing team to play one of their best games of the season and go on to win a huge victory over the Boston Bruin’s. Watching the retired greats during the on ice skate revealed just how shaky some of them had become.  Even Patrick Roy admitted he was glad that the skate only lasted five minutes.  It serves as a reminder to the church that there is still a place for the older generation to inspire us.  Maybe some of those who have had a significant place in the storied history of your church can no longer work as hard and last as long, but they can inspire those who are coming behind to greater victories in the present. 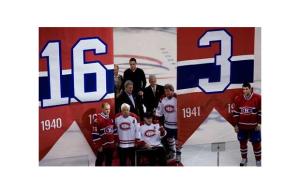 Third, I was inspired with how the Habs organization pursues excellence.  Oh I know they have some detractors who feel that a whole year of celebration is a little much, but you have to admit, whatever the organization does, they do with class and excellence.  Let me ask you something, if they can do it, why not the church?  Every time we come together to celebrate, we are celebrating God, the ageless Creator of the World, His One and Only Son, Jesus Christ, the Savior of the World, all driven by the power and presence of the Holy Spirit!!!!!

Our celebrations should be the hottest ticket in town with a line of people waiting to get in.  We should always come to the celebration with an expectancy because you never know ” Who”  may show up.  And for those responsible to organize the party, don’t give second best, pursue excellence because the people coming to the celebration deserve the best!!!!!

Church should not be the place you go if there is nothing else to do, it should be the best party in town!!!!!