I am writing my last blog about the Ukraine while flying home from Germany to Montreal.

What an incredible two weeks this has been and what a way for Reinventing the Church to begin a new decade of leadership development worldwide.

Thank you Ukraine for providing the canvas, its people for the contrast of colour and the Church for giving me a variety of brushes to work with so I can paint a clear picture of what God has called us to do!

The Church in Ukraine is in a season of harvest.  Again this past Sunday in a Kiev city center church, I invited people to come to the platform and accept Jesus as their personal Saviour.  Eight or ten people got up out of their seats, stood before a congregation of about eight hundred and publicly prayed a prayer of confession.  There was no coercion or coaxing, they came without hesitation.

From charismatic to traditional Pentecostal churches, I gained a perspective of the contrasts in the Ukrainian church.   From pastors to Bible college students I had the privilege of pouring into leaders. From missionaries to mission’s organizations I had a chance to network.  From orphaned children enjoying a McHappy meal for Christmas to a youth convention of next generation young people, I got a glimpse of a potentially powerful future for the church in Ukraine.  From prayer meetings to Q & A’s with church leaders I was challenged to be “ready in season and out of season”. 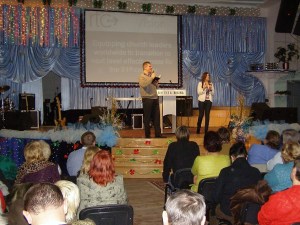 It became clear to me at a pastor’s conference in the first week why I came to the Ukraine at the beginning of 2010 in the dead of winter (minus 21 degrees celsius on the way to the airport at 2:30 a.m.).  I firmly believe that the people and church of Ukraine helped me to paint a picture of what God is calling Marie-José and I to do in seven other countries on two more continents this year.  There was a strong sense in my spirit that God was using the church in Ukraine as an indication of  what we will experience around the world in 2010.

To Terry Burns and Ed Dickson, I say thank you for believing in me and putting this trip together!  To my translators, Vova and Anya, I could not have done it without you. 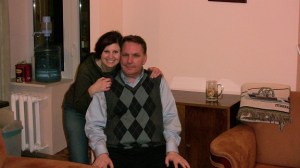 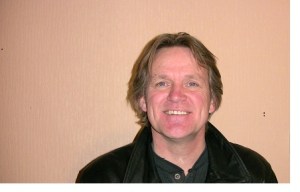 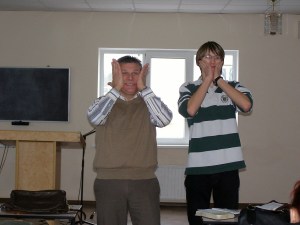 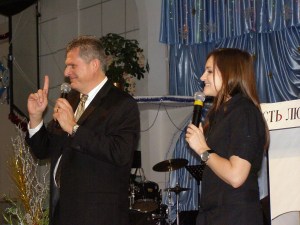 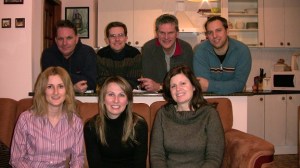 Missionaries Burns/Lasante/Poulin (I will let you guess who belongs to who?)

And to those who support us in prayer and finances, your prayers sustained me and gave me an unusual strength to meet the demands of a hetic schedule.  Your financial support allowed me to network with other ministries and provide the finances needed to bring over three hundred pastors to a conference.  I was also able to sew into other ministries while there.

The next thing on the horizon is the privilege of marrying Jonathan and Julia in the Bahamas.  Following the wedding  Marie-José and I are off to the Continent of Africa and Vietnam for the next four months (March 16 – July 14, 2010).  You can check our complete schedule (Canadian and International) for 2010 on our website at www.reinventingthechurch.com