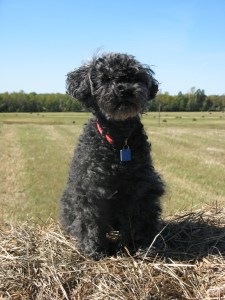 Years ago I had an uncle who had to put his dog to sleep.  My father happened to stop by to say hi and found his brother sitting in his kitchen, bawling his eyes out as he viewed pictures of his dog spread all over the table.  We used to chuckle as kids as my dad would tell the story.

Well today the shoe is on the other foot.  This past Friday, the Mann family had to say so long to a twelve inch high, nine pound (soaking wet) little black poodle named Buster who had been in our family for 14 years.  Dog owners will understand how difficult this is.  I would never have thought  that such a small animal could weasel his way into the hearts of a family unit.  Buster became a part of the fabric of our home and shaped a personality around the love that he felt from all of us.

In spite of the changes that came with age (missing teeth, deteriorated eyesight and hearing, grumpiness and irritability – sounds like some of us!!!) he continually brought a smile to our faces and warmed our hearts.

The day we decided it was time to put Buster to sleep, my mother-in-law (without knowing what we were about to do) sent an email about an article written by Max Lucado.

“Like my dog Salty.  He sleeps next to me on the couch as I write.  He’s a cranky cuss, but I like him. We’ve aged together over the last fifteen years, and he seems worse for the wear.  He’s s a wiry canine by nature; shave his salt-and-pepper mop, and he’s pass for a bulimic Chihuahua.  He didn’t have much to start with; now the seasons have taken his energy, teeth, hearing, and all but eighteen inches’ worth of eyesight. Toss him a dog treat, and he just stares at the floor through cloudy cataracts.  (Or, in his case dogaracts?)  He’s nervous and edgy, quick to growl and slow to trust.  As I reach out to pet him, he yanks back.  Still, I pet the old coot.  I know he can’t see, and I can only wonder how dark his world has become.”

Thanks Max, I feel I am in good company!  Thanks Buster for bringing such joy to the Mann home for the past 14 years even after becoming an old coot.  Thanks for providing some great illustrations over the years.  Thanks for the memories!!!! 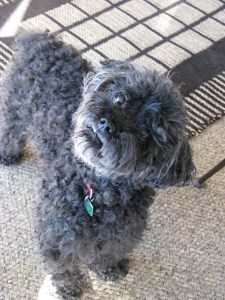