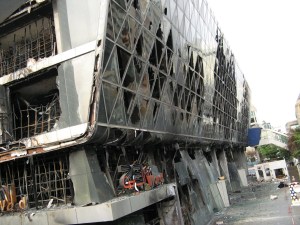 MJ and I found ourselves in downtown Bangkok (a city of ten million plus people) this past Tuesday, just two weeks after the confrontation that brought to an end a two month stand-off between the Red Shirts and the Thai army.  It was sobering to stand in front of the World Central shopping mall and witness the results of conflict.  As one person put it, burnt buildings and bullet holes in a traditionally peaceful culture have given Bangkok a black eye. 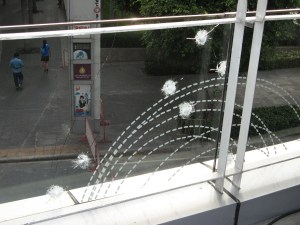 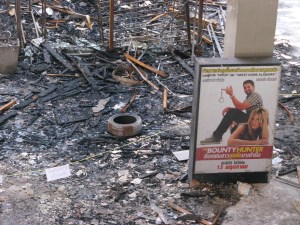 The Sunday following the confrontation, the City of Bangkok invited its citizens to come downtown for a massive clean-up.  What they thought would take several days was completed in the one day because so many people showed up.

I read a newspaper article yesterday of a TV journalist from France (Canadian by birth) who was seriously wounded in the crossfire during the confrontation.  As he crawled across the street in an attempt to get out of harm’s way, a Red shirt security guard helped him on to a motorcycle, took him to the closest hospital and stayed with him several hours until he knew that he would survive his life threatening wounds.  These stories are a reminder to me that in the midst of conflict there are still a lot of good people in the world whose actions take the attention off the black eye!!!!

What a week we have had in Thailand. 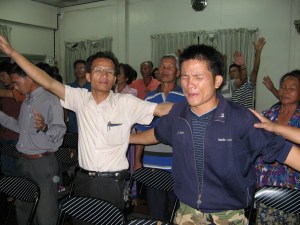 Spending four days with over 100 pastors and church leaders, speaking 14 times in seminars and churches, and having time with choice global workers like Peter and Pat Dewit have made our time here incredibly fulfilling. 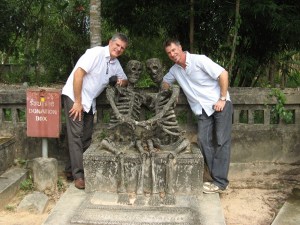 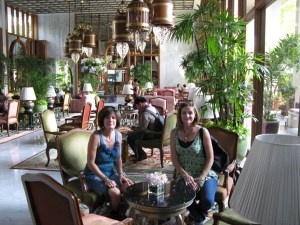 Today we fly to Vietnam and start another week of leadership seminars.  I look forward to writing you from Vietnam with some updates.