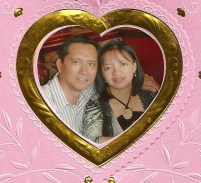 I had the privilege of officiating the wedding of a Filipino pastor friend of mine yesterday.  In front of a packed out congregation of witnesses, Rod and Julie united in marriage.

The Filipino culture includes some unique traditions in the wedding ceremony.  Following the vows and giving of rings three things happen.

First, there is the exchange of coins.  The groom is handed a small basket of coins which he immediately gives to the Bride.  Most of us who are married would chuckle and suggest that the groom is a smart man to hand over the money immediately to his bride because, ultimately, we know who will spend it.  But the tradition suggests that the groom takes the responsibility to care for the financial needs of his bride as her provider.

Second, the bride and groom are covered with a veil.  This symbolizes the covering and protection of God over their marriage and home.

Finally, a cord is placed around their necks.  Now, I suppose, there would be some who would interpret this tradition as the bride having control over the groom causing marriage to become like a noose around ones neck.  In Filipino tradition, the cord represents the bond of love that God creates between a man and a woman through marriage.  It symbolizes that it is their love for God and each other that will keep their marriage together through thick and thin.

So, thanks Rod and Julie for reminding us of what a healthy marriage is all about.  Oh, that every marriage would reflect provision, protection and bonds of love!  Just something to think about, maybe there would be less marriage breakdown and family heartache if we all chose to live out these traditions in our marriages.