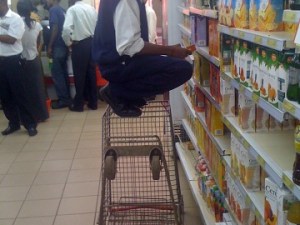 MJ and I are in the third week of waiting for our new installation of fibre optic Internet service. Week one was the installation of an eighteen foot tower on the roof of our house that was intended to pick up the signal of a base station in Kitwe.  The problem was that the mature trees in our area prevented the tower and base from communicating with each other.

Week two saw the tower come down and a phone line installed that would carry the Internet signal through the fibre optics of the phone line into our home.  I guess you could say that process, which began ten days ago, got “lost in installation”.  Last Thursday, I met my Internet guy at the local phone company and we decided that we would not leave until the installation was complete.  It took two visits, as well as paperwork and installation payments, being transitioned from department to department but by late Thursday afternoon, we had connectivity!!!!!

While at the phone company, I noticed a vision document posted on the wall of each department.  It was articulate and put a major emphasis on customer care stressing the importance of looking after the stakeholders of the company.  After experiencing a number of broken promises and continued delays, I took two of the employees over to the vision statement and pointed out the emphasis placed on customer care.  Within moments, I had connectivity.

Most organizations feel the pressure of pursuing a vision statement.  They can be very impressive when displayed on the wall, but extremely damaging if not acted upon by the employees.  If you take the time to articulate a vision, make sure you are prepared to spend significantly more time educating your people toward the incarnation of the vision on a day to day basis.  The Bible, which I believe to be the greatest leadership manual of all time, seems to know what it is talking about when it says:  “Without a vision, people perish”.  Organizations, companies and churches, without a vision will flounder and fail. Even worse are organizations that have a vision and fail to live it out on a daily basis…this is a certain death!!!

By the way, MJ and I enjoyed the Internet for four hours on Thursday using Skype and doing some emails.  When we woke up on Friday morning, we discovered that the Internet was down because a cable had been cut somewhere in Lusaka the night before.  It is Monday morning and we are still waiting for connectivity.  I guess it is time to re-visit the vision statement.  We have to find a way to see the humour in everything!!!

I could not resist sending you the above picture taken last week in the local grocery store.  This employee uses the shopping cart as a ladder to stock the shelves and swivels his hips to move it along the aisle.  I can’t tell you if he lives out the vision of the store but as for his ingenuity, I give him an A+!!!