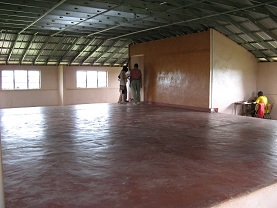 Stick with the vision…

Bigger is not always better. The original vision for the leadership center here in Kitwe, Zambia, was that we would train groups of twenty-five pastor’s at a time and offer multiple seminars rather than offer one big one. As great as it is to be able to say we had “hundreds” at a seminar, we have discovered that there is greater impact from discussion with a smaller group. RTC believes that less is more. 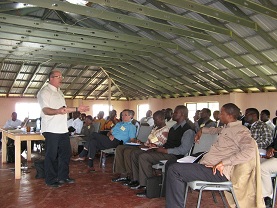 Well, a few weeks ago, when I discussed our inaugural seminar with the leadership of the Copper Belt district, they convinced me that I should offer a large seminar as they felt that there would be at least one hundred to one hundred and twenty five pastor’s present. This meant we would have to move from the third floor of the prayer tower to the chapel. On the Wednesday of Spiritual Emphasis days, (the day before RTC’s inaugural seminar), I discovered that only twenty-six pastor’s had registered for the seminar. Something in me felt that with that number we should move back into the prayer tower even though the renovations had been temporarily postponed. I spoke to our guest speaker and some of the leadership at the college, and we all agreed to move to the third floor.

What a day we had last Thursday. There was a brief feeling of apprehension moving back into the room where Rob’s untimely death had occurred, but that was soon dealt with as the forty pastor’s who showed up for our inaugural seminar called out to God in prayer. In a recent comment on my blog, a godly woman said, “Don, I believe the prayer tower will become a power tower”. Little did she know that pastors would bathe the prayer tower with powerful prayer last Thursday, leaving with us a sense that God would do something great for Kingdom purposes from that tower. 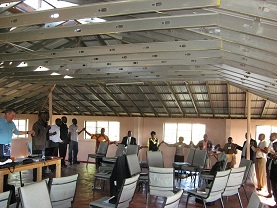 During the morning of the seminar, I felt a prompting in my heart as to the importance of “sticking with the vision”. We had said we would train twenty-five pastors at a time. I gave in to man’s pressure to allow for more. God reminded me of how He would honour the vision if I was willing to stick with the plan!!!

Some of you may remember that I committed a few months ago to putting fifty-two of my top blogs into print once I reached ten thousand hits. Well, this past week we crossed over the ten thousand threshold, so I guess I have some writing ahead of me.

P.S. We spent the day today with 60 pastors in the Kabwe area and tomorrow Bill Pipke and I have our third seminar in Lusaka