One of the Seven Wonders of the World…

Today marks my 52nd birthday.  And no, I am not suggesting that I am one of the Seven Wonders of the World.  However, I am writing this blog from Livingstone, Zambia, home of the famous Victoria Falls where MJ, Stephanie and I are spending the next couple of days.

Yes you read right.  Stephanie, our daughter landed in Lusaka, Zambia this morning on the day of my 52nd birthday.  Immediately, we drove five hours south where we will spend the next couple of days on safari and visiting Victoria Falls.

What a birthday gift, spending time viewing some of God’s greatest creations in the form of wildlife and cascading waterfalls.  But I must say, as great as that is, having my daughter land on African soil after months of separation is hard to beat!  Thanks Stephanie for coming and providing me one of the greatest birthday gifts any father could receive – your presence.

The only people missing are J & J, our son and daughter-in-law.  Jonathan and Julia, you could not be here but thanks for the special delivery of “Mookies” you had shipped on British Airways via Stephanie.  For those who are wondering what a “mookie” is, it is a combination of Reese’s Pieces Butter Cups lovingly inserted into a homemade peanut butter cookie (Julia’s own recipe).  It has become my yearly birthday treat made by my special daughter-in-law.  She even found a way to get it to me here in Africa!  Huh!

Well, as you can see, I am a blessed man!  You can enjoy all the wonders of the world, but nothing takes the place of a loving family.

God of wonders beyond all galaxies, thank you for giving me the gift of a beautiful wife and wonderful family on my 52nd birthday!

P. S. Sorry, no pictures.  Forgot the camera cable in Kitwe, and no… I am not going back to get it! 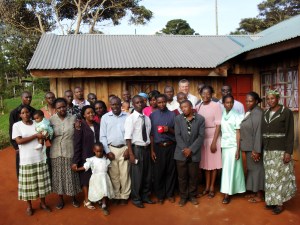 Humbled in the foothills of Mount Kenya…

I spent the last three days in Karuthi, a village nestled in the foothills of Mount Kenya.  A total of thirty pastors and church leaders, mostly uneducated and without practical leadership training, gathered at Victory Chapel.

Victory Chapel was started by Dr. Dan Kiambi about five years ago because of a burden he had to bring the gospel to his place of birth.  MJ and I first met Dan and his wife Charity at our church in Montreal.  They spent two years at Evangel while Dan taught and did research, before being invited back to Nairobi, to use his gifting in agricultural research. Now, years later, Dan asked if I would come to Karuthi and participate in a leadership conference along with some pastors from the CITAM churches based out of Nairobi.

MJ and I had just left our global workers’ retreat in Malindi, Kenya where we stayed in a beautiful room overlooking the Indian Ocean.  In sharp contrast, I found myself leaving Nairobi and heading toward the beautiful but mostly impoverished foothills of Mount Kenya.

In full transparency, I must admit on the first day I found myself asking, what am I doing here?  What impact could I possibly have in such a village?  To my shame, it even crossed my mind that surely my experience could be better used elsewhere.

As always, it never takes long for me to see how God uses people to teach me far more than what I can teach them.  I saw humility and a hunger to learn in the people that God had given me opportunity to teach.  Further, I began to get a sense of the privilege that was mine to invest in people who have been neglected in practical leadership training because of where they live.  I was further humbled by the fact that the teaching team included pastors from Nairobi who pastor churches of thousands but were willing to spend a day of their lives pouring into people who deserve training as much as anyone else.

It never ceases to amaze me how God uses days like I just experienced to speak into my life.  On the last day, the final speaker spoke on brokenness.  He reminded us that if we truly understood the greatness of God, we would walk in a place of brokenness.  I paced the floor in prayer, at the back of that wood clad church with a corrugated steel roof, and asked God’s forgiveness for any pride that may have crept into my life and ministry.  As the speaker asked me to close in prayer, I found myself praying, “Lord, whatever it takes for my will to break, do what you need to do”.  Those are scary words prayed in the foothills of Mount Kenya and have continued to play in my mind in the days following the conference.

Talk about humility, I had the privilege of staying in the home of Dan Kiambi’s mother over the three days in Karuthi.  Upon leaving she told me that she had a gift for me, at which point, she presented me with a live chicken that looked just like the chicken on the box of Kellogg’s Corn Flakes.  We tied his legs, brought him back to Nairobi and had Kellogg’s Corn Flakes for lunch on Sunday.  Dan reminded me that in African culture, when one gives the gift of a chicken or goat, it is a sign of honour.  Wow!  Humble me some more Lord!!!! 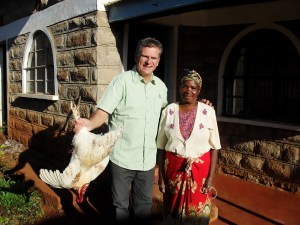 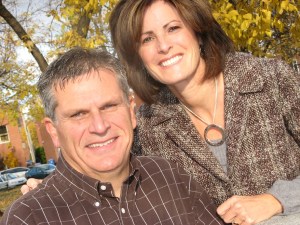 I don’t understand but I trust You…

What a terrific week we have had at our annual global worker retreat here in Kenya!

I must admit that a few days before the retreat, the thought of packing, getting on a plane spending five days in sessions and workshops was not a top priority.  However, now that we are here and our time together is coming to a close, MJ and I now realize just how much we needed these days.

The last three months of adjustment to a new culture, renovations of a home and leadership center and the sudden death of Rob Hall, had taken its toll on us.  These days of retreat have allowed us to pause, work through the events of this first quarter of 2011 and be refreshed through friendships and times of worship and the teaching of God’s Word.

Two nights ago our group of global workers from across the entire continent of Africa were invited to sing a song that talks about the fact that God gives and He takes away.  During the song I could not help but say to God that I did not understand why Rob had to be taken from us so prematurely.  I no sooner had thought it when I heard our guest speaker speak into the microphone and say: “you may not understand it all but you must trust God”.  Well one might call that coincidence but I choose to believe that God used it to answer my question.

MJ and I fly back to Nairobi on Wednesday where we will be picked up and taken to speak at a three day pastor’s conference.  We will leave here refreshed and with a sense that we are sure glad we came.