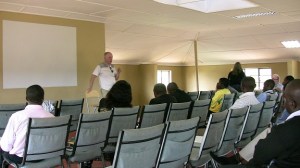 Rob was everywhere and willing…

I don’t know if the term “Divine appointment” means anything to you but every once and a while something happens that causes me to realize the presence of a “God moment”.  It is a moment that is not planned from the human perspective, but when it happens, you recognize that God must have put it together.   Last Tuesday was one of those moments.

During a break between classes at our church planting intensive course, Ken and Lois Hall, parents of Rob Hall, came unexpected at the Ministry Formation Center.  I knew they had arrived in Kitwe for the dedication of the Centre in memory of Rob, but I did not know that they were coming to TTC the day before just to spend time on the campus.  After showing the second and third floor of the Center to them, a sobering moment as it was the first time they were seeing the spot where Rob has lost his life, I asked Ken if he would like to say hello to the church planting class.

For twenty minutes, he poured out of his life into the hearts of the students.   As he shared, he referred to a white sheet that the student body at TTC had prepared for Rob’s funeral back in Canada.  On it, students expressed what Rob had meant to them while he was on campus.  Ultimately the sheet was placed over Rob’s coffin for his memorial service in Cambridge, Ontario.    Ken referred to one comment in particular that stood out in his mind:  “Rob was everywhere and willing”.

As I sat and listened to Ken share with the students, I recognized that we were experiencing a “God moment”.  It was an unscheduled appointment with a father, who was standing in the spot where his son had died two and a half months earlier – a “Divine appointment”!  Those of us who sat and listened were privileged to observe a man of great spiritual depth and insight who probably at that moment was experiencing a time of healing in his own life.

Ken is a reminder that with God we can get through the storms of life.  It doesn’t mean it is any easier but it is during the storms that we realize the importance of trusting God and looking to Him for strength.

The student who wrote “Rob was everywhere and willing” provides a motto that I would hope all of us are willing to live out in our daily lives.  There was no place that Rob was unwilling to go and provide a helping hand.  As a matter of fact, he died because of a willingness to volunteer his time in helping us with renovations to the Prayer Tower.  How fitting that last Wednesday the tower was renamed and dedicated as “The Robert Hall Ministry Formation Center”.  Huh!

So, can I encourage you to take advantage of every “Divine appointment” and “God moment” that may come your way.  You never know when those unscheduled moments may show up because it’s up to God to decide when they will.