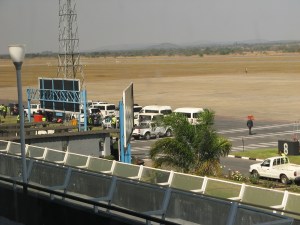 Held up by Hillary…

MJ and I flew to Namibia on Friday to begin a week of ministry.  While waiting to catch a connecting flight in Lusaka, we discovered that Hillary Clinton was about to arrive to speak at an International conference.

Known as a person who likes to be where the action is, I stood and watched from a second floor window at the Lusaka International Airport, as the secret service prepared the entourage of vehicles.  They had a specific order and strategy for every vehicle, including a dog that sniffed every car for bombs.

I stayed at the window as long as I could until it was time to catch our connecting flight.  As much as I wanted to catch a glimpse of Hilary, I wasn’t about to miss my flight.  At the gate, they delayed the boarding of our plane while waiting for her arrival.  Then suddenly, they ushered us to our plane, closed the door and we anticipated taking off for Windhoek, Namibia.  Our anticipation was broken by the pilot’s voice coming on the intercom announcing a further delay due to a “VIP movement”.  To make a long story short, we were delayed for one hour until Hillary Clinton’s plane landed.  I didn’t see Hillary, I only saw her United States of America plane as we raced down the runway, and I don’t even have a picture to prove it.

As we lifted off the ground, I was reminded that MJ and I were also on a mission to speak to a group of pastors in Namibia.  There would not be an entourage of vehicles waiting for us in Windhoek, nor would there be any secret service there to provide protection for us, not even a dog, but our mission was no less important.

I began to reflect on some of the comments I have received from Zambian pastors in recent days.

“RTC is a ministry born out of God’s heart for the sake of excellence and effectiveness in the body in Zambia and Africa.  What a privilege to have you around to prepare the church for the next level.” (Pastor Sydney Mulenga – Victory Church, Kabwe)

“What you are doing, the RTC seminars, are very important to us Pastors and to the Church at large.  The issues being raised and discussed are key issues both Pastors and Churches need to address.  Many new ideas are being born out of these, thereby enhancing effectiveness in ministry. Thank you.  Please continue and God Bless you as you continue reinventing the Church here in Zambia.” (Pastor Robert Kasema – Mt. Zion Church, Mufulira)

At the end of the day, I wouldn’t trade positions or planes with Hillary Clinton.  Her role as Secretary of State for the United States of America is significant, to the point that it clears air space at airports and delays those who are trying to get to specific destinations.  But you know what, my role as a global worker is just as significant and important and do I dare say, even more fulfilling?  What a privilege to come alongside pastor’s and church leaders on the Continent of Africa and to encourage them to finish the race they have started.  And guess what; I can do all of this without delaying others and causing them inconvenience at airports.  Huh!