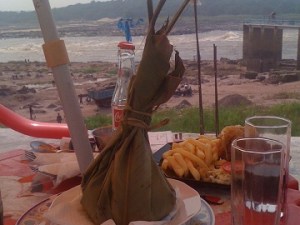 Once and a while, during my travels, I will experience something that makes a story in the Bible come to life.  Such was the case during one of my recent trips on the Continent of Africa.

The conference I was speaking at, took a break to celebrate a National holiday.  My hosts took me to lunch at a restaurant along the riverbanks of what is considered as the 3rd largest river in the world.

As we arrived at the restaurant, we noticed several buses with the word Senate on the side.  The restaurant and patio were filled with government workers and officials celebrating the holiday.  As we took our seats on the patio next to the riverbank, I was overwhelmed by the sight in front of me.

On the riverbanks were hundreds of men, women, youth and children breaking rocks into piles of gravel.  I will never forget the sound of metal hammering on rocks as long as I live.  But that sound was soon drowned out by the music, feasting and drinking of government officials who seemed oblivious to what was happening on the riverbank below them.

I felt like I was reliving Pharaoh’s oppression upon the children of Israel right before my eyes, including his order that Israel not only make the same quota of bricks, but gather their own straw as well.  I pictured what it must have been like as Pharaoh and his officials partied while the Israelites were down below making bricks through forced labour.

It is hard to believe that one could experience a similar picture in 2011.  Men and women, employees of a National government, drinking beer, and feasting at a buffet, ironically, celebrating what is known as Independence Day in their country. The people below were as oblivious to the fact that it was a National holiday as the government officials above appeared to be oblivious to the modern day slavery going on at the riverbank below them. 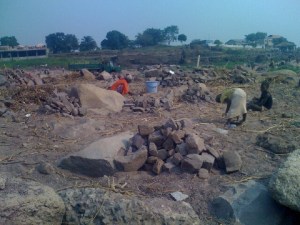 We met one mother of four children whose husband went on a business trip about four years ago and never returned.  In order for her children to survive she is crushing rock into gravel to try to put food on the table.  Her ten year old daughter working beside her has never been to school.  As a result of meeting this mom, an attempt is being made to get her daughter into one of the schools run by a local church.

If you are not sure what to pray for in other parts of the world, I would encourage you to pray against the corruption that politics, power and money breeds amongst leaders.  Pray that God will raise up leaders of integrity who will determine to model corrupt free governments.  Pray that the Church will arise as one voice to take a stand against corruption with the understanding that the Resurrection power is far superior to political power!!!

By the way, as we walked along the riverbank, amongst the people who were working so hard, I heard someone playing Celine Dion’s song “The Power of Love”.  I was reminded of what the power of God’s love could do for a person who is forced to work so hard for such little benefit.  If Celine only knew????