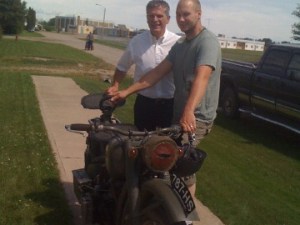 Down memory lane in Canwood, Saskatchewan…

I spoke at a church in Canwood, Saskatchewan, this past Sunday, on my way to Living Waters Camp. A young man in the church has managed to find on the Internet a motorbike dating back to WWII.  I was intrigued as the bike is very similar to the one that my Dad rode as a solider while stationed in England during the war.

Seeing the slit on the cover of the headlight cover, reminded me of the stories that my Dad and his brother would exchange at Mann family reunions.  The McNichol family in England took a liking to my father and my uncle and would invite them over to their home when they were off duty.  Many nights they would ride the country roads from their barracks to the McNichol home with only the limited beam of light provided by the slit, ensuring that they would not be detected by the enemy.  As a young boy, I would be riveted to my chair in the living room listening to their stories.

In 1977, I took my first plane ride with my parents and we went to England to revisit the barracks and office building that my Dad lived in and worked at during WWII.  We also spent a night in the McNichol’s home.  I will never forget the joy on my father’s face as he was reunited with the family just as I will always remember the memories he shared as he stood at the door of the office where he worked during the war.

So who would have thought that a Sunday in Canwood, Saskatchewan would have provided such a wonderful opportunity to walk down memory lane?  Thanks Pastor Glenn for giving me the privilege of speaking in your church.  Thanks Svend for buying a bike off the Internet and bringing it to church so that I could walk down memory lane.  Thanks Dad, for your time spent as a Canadian solider during WWII defending our great country of Canada! 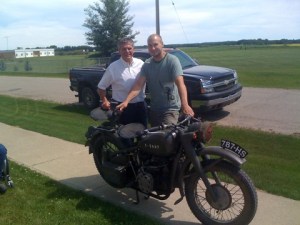