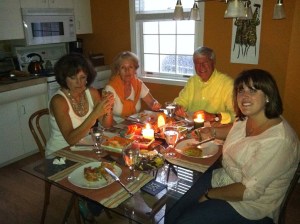 At fifty-two, I am reminded that a majority of my career is behind me, but the opportunity for greatest impact may yet be ahead of me. One thing I have realized, if I am going to have impact in the days to come, I will have to listen to the generation coming behind me.

I spoke at a camp on beautiful Manitoulin Island this summer. During the evening sessions, the first five rows were filled with young people. I had to continually remind myself that there was a room full of adults behind the youth and that I had to address all who were in the room not just the first five rows.

On the Saturday night of the camp, I was sitting in my accommodation doing some reading. A knock came to the door and two young men asked if they could see me. While we were talking, a second knock came to the door and another young man joined in. A third knock came a few minutes later, and a young man and woman came in on the tail end of our conversation. The conversation, from start to finish, lasted about two hours and at the end, we prayed for each other. When they left, I found myself rejoicing that the generation coming behind me was willing to sit and talk because they found someone who was willing to listen. What an adrenaline rush!!!

A week later, I was having breakfast with a dear friend and his son. We got talking about Facebook and Twitter. I admitted my reluctance to join, as I have perceived them as a social gossip network. Listening to the next generation during that breakfast, I was reminded of all the good that can be done through these networks, especially with my travels around the world. So, don’t be surprised if you see me on Facebook in the fall and “tweeting” as I travel around the world.

Finally, let me brag a bit about my twenty-four year old son. Recently, Jonathan was elected to the board of his home church. As his father, am I proud of his accomplishment? Absolutely! Do I believe he has the gifting to contribute to the future of his church? You can be sure! What thrills me most is that a congregation would believe enough in the next generation to place him on its leadership team. It is time that we realize there is a generation coming behind us who need to be involved in decisions that will shape our future. After all, the future is not about us, it is about those coming behind us. Are we listening???

By the way, Hurricane Irene brought three generations around our dinner table last night. We lost power and ate ham sandwiches instead of a hot chicken meal, but thanks Irene for giving us an intergenerational memory that will last a lifetime!