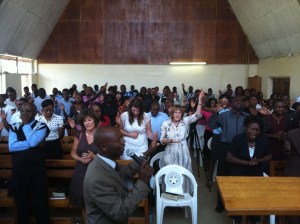 Mathematics was never my favourite subject in school and by the looks of the above equation, you can understand why.

Actually, the above equation has nothing to do with math and all to do with the presidential elections that will take place here in Zambia tomorrow. Fifty-five percent of eligible voters in this nation are between the ages of eighteen to thirty-five years of age. It is incredible to think of how the future of a nation can be shaped by such a young group of people.

Ironically, I preached in a church yesterday where eighty-five to ninety percent of those who attend are between the ages of eighteen to thirty-five. The attached picture shows a full church but you need to understand that only half of the congregation was there. Normally, there is another group of young people outside watching the service by close circuit television. Yesterday, about half of them had gone back to their area, preparing to vote on Tuesday.

What strikes me is the potential there is for change through the next generation. Change will either be constructive or destructive. In 1 Corinthians 6:12 the Apostle Paul told the people of Corinth, “everything is permissible, but not everything is beneficial…I will not be mastered by anything”. “Everything is permissible” was the destructive slogan of immorality that had become the theme of the city. Today’s generation of eighteen to thirty-five year olds are bombarded with the same destructive forces that are based on the principles of a secular society.

I believe God is raising up a generation of young men and women in Zambia who will channel their passions toward constructive Kingdom impact! They will be a generation who decide not to handle, taste or touch the basic principles of this world.

Furthermore, I am convinced that God will honour the dreams and goals of a generation of youth who determine to put God first. Prosperity will come to the nation of Zambia through young men and women who are sold out to Jesus and use their God given talents to construct a society filled with God honouring, integrity driven businesses! May business prosper and finances flow through a generation of youth who “seek first the Kingdom of God and His righteousness” with the understanding that “all these things will be given to you them as well” (Matthew 6:33).