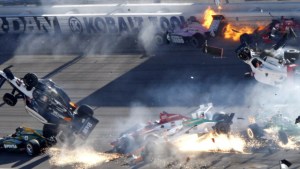 The “suddenlies” of life….

MJ and I returned home late afternoon yesterday after spending some time with our son and daughter-in-law in their beautiful apartment.

I turned on the television and did some channelling surfing to check out what was going on in the sports world.  As I was surfing, I came across the final Indy Car race of the season, however, I noticed something unusual.  It was a clear sunny day at the racetrack, but no one was racing.  Instead the drivers and their crew were all sitting around their race cars in what appeared to be stunned silence.

Sensing that something was not right, I continued to watch, only to find out that there had been a horrific fifteen car crash about two hours before and everyone was awaiting the news about the condition of Dan Weldon, who had been airlifted to hospital.  By this time, my wife and daughter joined me in watching as people around the racetrack sat in the hope that they would hear some news that Dan Weldon would be okay.

Suddenly, an announcement was made that the race would be cancelled because Dan Weldon, the Indy driver who started the race in the thirty-fourth position, had died in his thirty-third year, leaving behind his wife and two small children. 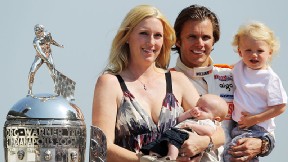 Early this morning, I was reminded of a time when my parents were away and I stayed in the home of some family friends.  The room I slept in had a plaque on the wall that read, “What shall it profit a man, if he gain the whole world and lose his own soul”.  That statement, which I later learned comes directly from the Bible, impacted me at a very young age, and I have never forgotten it.

Dan Weldon and thirty-three other Indy drivers went to work yesterday.  They have chosen a high speed, high risk career that is meant to entertain people Sunday after Sunday.  During the last race of the Indy season, the thirty-fourth man, died in his thirty-third year doing what he loved to do.

Ironically, Dan Weldon was racing for five million dollars.  He started in thirty-fourth position but if he could end the race in first, he would win five-million dollars!  Eleven laps into the race, money no longer mattered as suddenly life came to a standstill.

As you begin your work week, do a “soul” check.  Your career may have far less risk and at the end of the day you may not have five million dollars in your pocket, but you are equally as prone to the “suddenlies” as Dan Weldon was.

Always keep life in perspective.  Work hard, play hard, and earn what is rightfully yours. But remember, that at the end of the day, what counts the most is a personal relationship with Christ that will prepare you for the “suddenlies” of life.