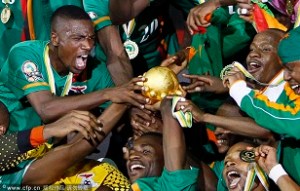 Zambia is still basking in the thrill of their first ever victory at the Africa Cup of Nations 2012.  Two weeks after winning the football championship, people still light up when you mention the word Chipolopolo (the name of the Zambian National team which means “the copper bullet”).

What makes the victory especially sweet is the fact that it has allowed the country to overcome a tragedy that has haunted Zambia for years.  In 1993, the entire Zambian football team was killed in a plane crash on their way to the final match of the same African Cup.  Ironically, the game was being played at the same place as this year’s championship match.

There is a feel around the country that this year’s triumphant victory at the African Cup has removed a cloud of tragedy that has hung over Zambia for years!

This past Wednesday (February 22nd) marked the first year anniversary of the death of Robert Hall.  Rob lost his life while doing some structural work on the third floor of the prayer tower at TTC.  After several weeks of dealing with the tragedy, many of you will remember that work on the tower moved ahead.  In April of 2011, the tower was dedicated as the Robert Hall Ministry Formation Center.

One year later, the Robert Hall Ministry Formation Center is doing just what the name suggests.  Last Wednesday marked the second of three days of student ministry formation at TTC.  Over three consecutive Wednesdays following chapel, the students break into year sensitive groups across the campus and discuss “life experiences” in ministry that the classroom cannot teach.  These groups are led by four seasoned pastors from the Copperbelt District who in the midst of discussion are mentoring and pouring into the student body. Topics include spiritual disciplines, character development and ministry philosophy.

At the end of the session last Wednesday, the first year students who were meeting on the third floor of the Ministry Formation Center broke out in prayer. You could hear them praying all across the campus.  It was so touching to hear prayer coming from that third floor on the first anniversary of Rob’s death.  As a matter of fact, as I looked at my watch, I realized that prayer was echoing across the campus at almost the very hour that Rob had died one year earlier.  I quickly ran to the third floor to capture the moment on camera. 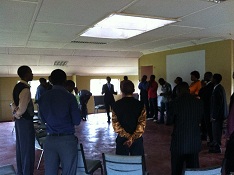 The Chipolopolo victory this year will never wipe out the tragedy of 1993, just as the memories of Rob Hall will never be forgotten.  But it is a reminder of that life must go on and we must find a way to turn tragedy into triumph!