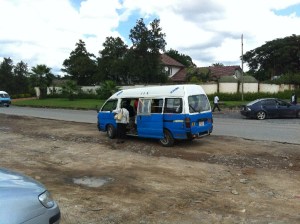 I sat where they sit…

The major mode of transportation in Zambia is these blue and white mini buses. For three thousand kwacha (about 75 cents Canadian), you can travel anywhere in the city.

Last Thursday, my car was in the garage for suspension repair – a common occurrence on our Zambian roads. When I called the taxi driver who normally takes us to the airport, he told me that his taxi was also in the garage, a not so common occurrence in Zambia as they usually run them until they can run no longer.

I decided to start walking the five or six kilometres to our home while I contemplated what I would do. Then I got thinking, this would be a great opportunity to experience “the Zambian mini-bus”, something I purposed to do while living here. You need to understand that of the thousands of mini-buses on the road, I have only seen one that looked like it might be one year old or less. For the most part, they are falling apart and literally held together by the equivalent of Zambian duck tape.

The one piece of advice given to me was to look like I know what I am doing when I get on, even if I don’t. As they opened the side door to let me in, the door was barely hanging on the hinges. The only seat available was in the middle of the bus and because I was the fourth man in a row that seats four, I literally had to squeeze my backside in between a man and a woman. The good news, no need for a seatbelt!

MJ and I have been blessed to have two mid-term PAOC global workers living on the property with us for the last year. They have become experienced mini-bus riders. Laura has enjoyed taking pictures of the unique sayings on the back window of the bus, unless of course, the window is broken and held together with the Zambian duck tape. She has often said that she would like to see me take a mini-bus before her return to Canada.

On Thursday, when I arrived home, I went to tell Laura what I had done, she said, “I already know”. Thinking that MJ had told her, she preceded to tell me that she took a picture of a mini-bus called “Purpose”. When she got home, she looked at the picture and noticed a white man standing in line. As she zoomed in, she realized it was me!!! Huh, what are the chances of that? If you enlarge the picture enough, you will notice me asking questions of the locals as to what bus I was to take. 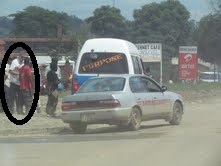 So, every time I pull up beside a jammed packed mini-bus, I now know what they experience everyday, because “I have sat where they sit”!