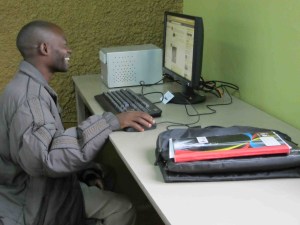 I have no idea where the expression “a million dollar smile” comes from or what it means, but I can tell you what it looks like.

One million Zambian kwacha’s is the equivalent of two hundred Canadian dollars.  That was the cost of an internet modem that put the smile on the face of this student at Trans-Africa Theological College.  This past Friday, we did a trial test of the new Internet Café at TTC.  Nine of the ten computers were running simultaneously and the speed was absolutely incredible.  Maybe to those who have unlimited access to high speed internet, this perceived euphoria seems a little over the top, but in Zambia, a country ranked as the 184th worst country around the world for internet service out of 187, this means everything.

Last year’s dream of an internet café at the college became a reality this past week because of two churches in Montreal, Laval Christian Assembly and Trinity Pentecostal Church, who caught the vision and raised the funds for the project.  Ten computers came from a company in Montreal who donated the computers they were turning over.  Two brand new computers came from a family who wanted to do something in another part of the world instead of buying gifts for themselves last Christmas.  The pastor of Laval Christian Assembly and an IT specialist in his church gave a week out of their busy schedule, to come and set up the internet café. 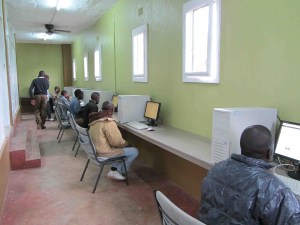 Today, the café is ready for the students return from their school break in two weeks time.  After a three month trial with the students, the café will be opened in September to the surrounding communities.  It will provide a service that does not presently exist in those communities on a campus where Jesus is the center of all we do.  That puts a “million dollar (five trillion Zambian kwacha) smile” on my face!!!!!