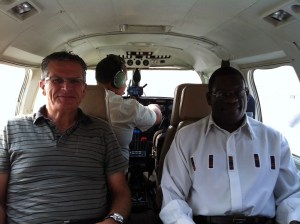 The Zambian gang of four…

I find myself writing this blog while flying in a six seater plane with my Zambian gang of four. Bill Pipke (pastor of Evangel Church, Chatham), David Krogman (a layman from Bill’s church), Bishop David Chibale (outgoing missions director of the PAOGZ) and myself are touring the southern and northern provinces of Zambia.

So much to write about. Where do I begin so that you can get a glimpse into our world this week?

First, I think of the reward of fulfilling what RTC has been established to do – conducting pastor’s seminars on relevant topics that relate to where the church is living today. A pastor came to me at the end of our day Saturday and thanked RTC for helping to get the church back on track and heading in the right direction.

Second, there is the joy of preaching in a church that has just turned one year old. Yesterday, I walked into a school classroom in Livingstone, Zambia where Pastor Micheal Zulu is planting a church. Every desk was filled with people where the oldest was forty three years of age. As I sat there waiting to speak, and saw a classroom filled with young people, I was prompted to change my message and talk about “A Young Man With a Cause” – the cause, the conversion, the commotion, the choice. You may have guessed by now, I was talking about Paul the Apostle.

Third, I never tire of watching the thrill of team members from Canada who see Victoria Falls (one of the seven natural wonders of the world) for the first time. It is an incredible part of God’s creation. More about this next week.

Finally, sometimes there are little surprises along the journey that you are not expecting. I never dreamed that the team would have the time to go on a two hour safari before the start of the seminar. In the two hours we had, we saw three of the African big five – elephant, buffalo and rhino. Before leaving the park we even saw zebra and giraffe. God’s creation is absolutely amazing!!!!

So, in just a few moments time, this six seater plane with land in Kasama, northern province where the gang of four will prepare ourselves for revival meetings and another RTC seminar. Once again, it is my hope that with God’s direction, we will be able to provide pastor’s and church leaders biblical leadership principles that will carry them to the next level of effectiveness.

By the way, David Krogman has been watching the fuel gauge on the plane and has just informed us that we are “flying on empty”. So, we will land, sooner or later… 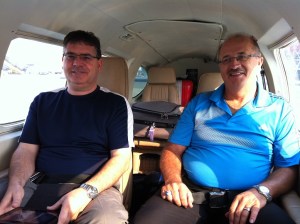