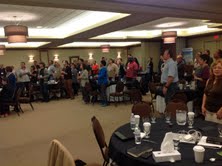 From the prairies to the mountains…

The last two weeks has been a reminder of just how vast and beautiful is our beloved country of Canada.

Whether the vastness of the Saskatchewan prairies, or the majesty of the British Columbia mountains, I have been reminded of just how blessed we are to call this part of the world home.

Over the last twelve days, I have lived a ministry dream.  Speaking to pastors, church leaders, congregations, and young men and women preparing for ordination has been so rewarding.  Preparing fifteen presentations over twelve days has been challenging.  Pouring into literally hundreds of people’s lives in two western provinces has been humbling.

As RTC rebranding unfolds over the next few weeks, you will notice a greater emphasis on the phrase, “Two Continents…Two Perspectives”.  This is truly becoming a reality.  Spending six months in Africa and six months in Canada in any given year, allows me the opportunity to share principles of “out of Africa” that have potential to enhance the Canadian church.  Equally so, I am constantly learning through discussions with Canadian leaders, nuggets that will be shared with leaders around the world.  As a result of my travels over the last two weeks, words like “engage and execute”, “bend or break” have been a part of our discussions as church leaders.  Already they are being used to enhance our seminar topics and create new ones.

Even the Canadian Football League has taught me something in the last couple of weeks.  At the pastor’s conference in Saskatchewan, I, a Montreal Alouettes fan, was presented with an official Saskatchewan Rough Rider jersey.  Even my name is embossed on the back.  During my flight home, I watched a documentary called “The Thirteenth Man”.  It described the incredible loyalty of the Saskatchewan fan base, (the thirteenth man) and their enthusiasm for their beloved Rough Riders.  Within the documentary, the commentator used the word “community” to describe the atmosphere created by the fans.  I was reminded that “community” is what the church is all about.  Yes, I will wear the Rough Rider jersey, all be it in the house, as a reminder of why RTC exists, to revive, renew and restore the “community” of the Acts 2 church.  I would also remind Rough Rider fans, that the Allouettes beat the Rough Riders last weekend!!!

So, over the last two weeks, I have lived the RTC dream, coming alongside the established church and emerging leaders to revive, restore and renew the relevance of the Acts 2 church.  Wow!  Thanks Lord, for allowing me to live the dream!!!!! 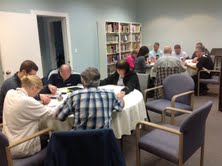