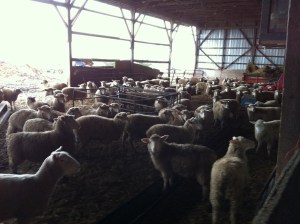 Last Monday, I had the privileged of spending some time on a sheep farm in Northern Ontario.

The story in Matthew 9:35-38 came to life as I spent time with Tom, the shepherd of over seven hundred sheep.  Let me share three observations with you.

I watched as hundreds of sheep scrambled to find their place at the feeding trough in anticipation of their barley meal.  Those who failed to aggressively nudge their way to the trough, wandered in circles looking harassed and helpless because they would not get to eat.  When I asked if sheep are as dumb as some say they are, one of the farmers that was with us said, “Sheep are as useless as a bag of hammers”.

The church needs to wake up to the reality of the needs of the people in the community it serves.  We need the same compassion of Jesus who saw people as  “harassed and helpless, like sheep without a shepherd”. 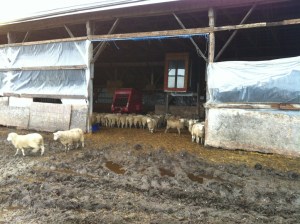 At one point, Tom and I stood outside the barn, looking in at the sheep.  Many were eating.  A few were leaving.  One or two were at the barn door contemplating.

What’s the take home?  We need to look at the local church from the outside in.  When people drive by our church, what do they see?  Have you ever taken the time to ask people in your community what they think of your church?  Or, are we too intimidated to ask the question because we fear what they might say?  Sometimes, we are so busy “feeding ourselves” inside the church that we fail to see those who are walking out the door, or at the threshold of decision about leaving. 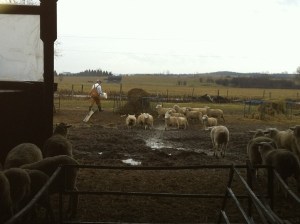 Finally, I had a chance to observe the reason we came to the farm in the first place.  During a weekend of leadership coaching with the local church, Tom, the shepherd, made an observation about twelve of his sheep who never come in the barn to eat.  They choose to eat hay outside the barn instead of coming in for a good barley meal.  After some discussion on the matter, Tom decided that he would go home and take some barley to the sheep outside the barn instead of encouraging the sheep to come in.  To his amazement, eight of the twelve sheep came to the trough outside the barn and ate the barley meal.

It is time that churches face the fact that there are people in our communities who will never walk inside the door of a church, in spite of how good we feel the barley meal may be.  Are we prepared to find creative ways of presenting the full Gospel meal to those outside the church, with the understanding that they may never come in to eat? 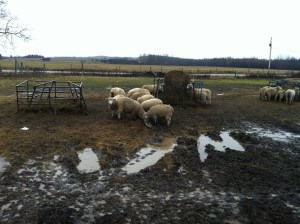 Speaking of harassed and helpless, I was one of over fifty thousand people yesterday who watched the Argos beat the Alouettes in the Eastern final football game at the Big O.  Oh well, I guess we should be happy that the Argos get a chance to win the Grey Cup in front of their home crowd next Sunday!  Don’t let us down Argos, the Al fans are giving you a chance!! 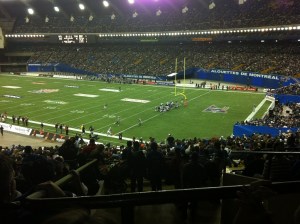