Note:  If you have not read last week’s blog “Harassed and Helpless”, I would suggest you scroll down and read it first so that part two will make more sense.

Today’s blog includes a follow-up email from Tom, my shepherd friend in Northern Ontario.  It never ceases to amaze me the illustrations God gives to us through His creative power.  Enjoy the read! 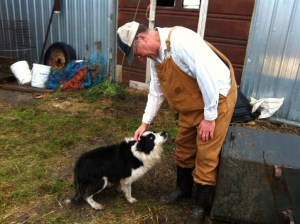 I know you want an update on sheep behaviour. Those few lambs outside the barn were coming up to the barn waiting for me to bring the barley out to them. I moved the trough up to the barn around the corner of the barn door so that the ones inside couldn’t see it. The small group would then come and feed up closer. Then they were waiting inside the barn for me to take the feed outside for them. Now the trough is inside the barn but I still have to feed the other ones first to keep them busy, then I’ll feed the small group last in the corner by themselves. Still they are IN THE BARN!  There are a few others that were always in the barn, yet still have no interest in the barley. Just like some bench warmers in church. They are offered to feed on the word on a weekly basis but will not eat. Hear the word yet not listening or responding. I guess we all have them.

This one is for pastors.

As I was shearing lambs, this came to me. Picture in your mind both the sheep of the church, and of the barn going into a worldly environment. They pick up soil on themselves, get burrs stuck in the wool, and the wool gets too long between shearing (and attending church).  They get caught in the storms of life and can’t stand up under the weight of wet, soggy, dirty wool that they have accumulated along the way. They buckle.

We will liken the pastor to the sheep shears. The sheep come in for a shearing under the word of God and repent of their filthiness. The sheep are free of their heavy burden, spotless, white as snow, and ready for the bride groom (just like real sheep ready for sale).  However, in the process of shearing, the sheep sometimes resist the process and get nicked from the clipper.  Aren’t people like that when receiving correction from the pulpit? Too much resistance sometimes require stitches and anointing oil.

Also in the wool is an oily substance called lanolin, commonly known as the yolk. The clippers gum up after a while because of the yolk and become less effective in shearing. Simply by ANNOINTING the clipper with OIL, it BREAKS THE YOLK and the clippers run free again. Pastors need to seek the anointing each and every time they step behind the pulpit because it is the anointing that breaks the yolk.

You can also remind your pastors that they can shear sheep as many times as necessary and they will keep coming back. BUT, THEY CAN ONLY SKIN “EM ONCE!

We are certainly praying to the Lord of the harvest to equip and send workers into His field.

So Don, may you and your wife have fun as you explore Gods play ground.

Thanks Tom for the insights.  You are a blessing to the Kingdom!