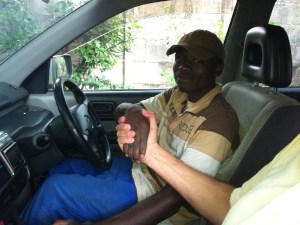 We are just a few weeks away from our first major conference of the year here in Zambia called “Mentoring a Generation”.

This past weekend, I was a given a little taste of what mentoring in Zambia can look like.

It started with a young man by the name of Osward.  For the last two years MJ has mentored Osward in the art of yard work.  Twice a week Osward comes to our property and maintains the lawns and gardens.  Alongside his yard responsibilities, he often washes our car.  The first time I asked him, he lit up light a Christmas tree and with great pride, made my twelve year old car look like new.

This past weekend, I asked Osward if he has ever driven a car.  Of course the answer was no.  After a few moments of instruction, I allowed him to drive the car from the back of the property to the front for its weekly cleaning.  Like all young men his age, he prefers the gas pedal more than the brake.  Fortunately, the car was in park and his foot was on the brake.  My little four cylinder engine has never revved so high!!!

By the way, Osward’s salary goes toward the cost of his education.  He either wants to be a doctor or pastor.  Either way, he will be in the business of healing people and we will have played a small part in making this happen by assisting with his education.

Then on Sunday, I had the privilege of preaching in Peniel PAOGZ Church.  Peniel is lead by one of PAOGZ’s finest leaders, David Chibale.  David, like many Zambian pastors, has what he calls “spiritual sons”.  They are not his flesh and blood, but he mentors them spiritually as they come to know Jesus.  I told one of his spiritual sons yesterday not to take Pastor Chibale’s mentorship lightly as he is being mentored by one of the best!

At the end of my message, ten to twelve people responded to a call for salvation.  As they lined along the front of the church, I noticed that every single one of them was under the age of twenty.  I was reminded of the fact that mentoring a generation is one of the church’s greatest tasks. 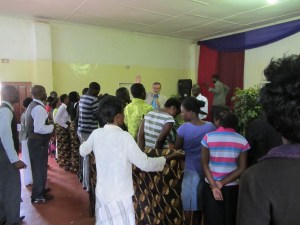 During the offering response, two young men stood to do a wrap.  A wrap of that nature would split many of our Canadian churches down the middle.  In Zambia, everyone breaks out in applause.  Maybe we in Canada have something to learn from Zambia about “mentoring a generation”.

Today, MJ and I went to the airport to pick up a team of seven from Faith Tabernacle in Welland, Ontario.  Of the seven, four are between eighteen to twenty years of age.  Oh that their two weeks here will be a powerful time of mentoring through the Zambian people they will meet.

So, somehow this weekend will stand out as personal preparation for our upcoming “Mentoring a Generation” conference.  The church must find a way to make room for and prepare an incredible generation of young men and women who are coming behind us!!!!