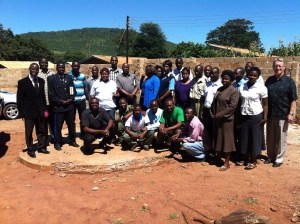 Here in Zambia, traffic violations are known as “Admissions of Guilt”.  In thirty seven years of driving, I can count on less than one hand the number of speeding tickets I have had in Canada.  After three years of driving in Zambia I have no less than seven Admissions of Guilt, and now MJ is starting to catch up to me.  It is not hard to be guilty when you can be pulled for exceeding the speed limit by one kilometre, or crossing a solid line that you cannot see because the paint is worn off.

This past Thursday, I had the privilege of speaking to a group of off duty police officers in Chipata, Zambia.  A graduate of Trans Africa Theological College is the Police Chaplain there.  I was able to tell the officers that I am a huge contributor to the Zambia Police department because of my multiple “Admissions of Guilt”.

Early that morning, as I prepared for my talk, I was asking God what He would want me to say to such a group of community influencers.  Just twenty four hours away from Good Friday, I kept thinking of Jesus final words on the Cross, “It is finished”.  I felt impressed to talk to the officers about “finishing well”.

I began by talking about some of those in the Bible who started well, but did not finish well.  Saul, anointed as King of Israel, allowed jealousy of a young man by the name of David, to destroy his kingship.  Korah, a natural leader whose ability to influence people, caused him to stir up a rebellion against Moses.  Judas, one of the original twelve disciples, allowed the greed for money to ultimately cause him to betray Jesus for thirty pieces of silver.  These men started well, but they failed to finish well!

There is one Man who has withstood the test of time.  He is the most influential leader of all time.  His name is recognized around the world and no one to this day has ever surpassed His influence.  That is why He is loved by millions and hated by many.  His name is JESUS and He finished well!

Jesus, who being in very nature God, did not consider equality with God something to be grasped, but made Himself nothing, taking on the very nature of a servant.  Being made in human likeness, and being found in appearance as a man, He humbled Himself and became obedient to death – even death on a Cross!  (Philippians 2:6-8).

In the final moments of Christ’s life, as He hung on the Cross, knowing that all was now completed, and so that Scriptures would be fulfilled, Jesus said:  “It is finished”.  With that, He bowed his head and gave up His spirit.  (John 19:28-30).  Jesus finished well!

I have an “Admissions of Guilt” file in my filing cabinet at home, and trust me, it is getting thicker.  Every time I open the drawer and place the next “admission” in it, I am reminded that all of us were born with such a file because all of us were born in sin.  Jesus finished well and completed His mission on earth so that our “guilt” file could be wiped clean.

When I asked the officers last Thursday if they would be willing to ask Jesus to remove their “admission of guilt”, four raised their hand and responded to the forgiveness of Jesus!  Although it does not justify my growing file at home, all the “admissions of guilt” are worth it to see police officers come to Christ.

By the way, when we flew out of Chipata, we were surrounded by Police and Army chaplains at the airport, two of them are graduates of TTC.  What an influence TTC is having on the nation of Zambia! 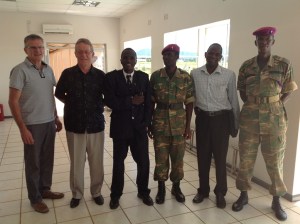