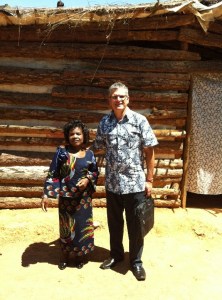 One of my childhood memories includes a man by the name of Don Feltmate, who recently went to be with the Lord.  A short man with a powerful voice, he was our family pastor in Moncton, New Brunswick for one year.

Even though I was only seven, I can still remember his dynamic preaching.  The story is told of a time he spoke at a Sunday School convention in Montreal, Evangel (our former church).  Back then, Evangel  had a massive pulpit (and I mean massive).  Don Feltmate was so short that they had to get a wooden coke case for him to stand on so that he could be seen behind the pulpit.  It was through that man that I first learned of the saying:  “Big things come in small packages”.

Yesterday, I was with the female, Zambian version of Don Feltmate.  MJ and I first met Pastor Ruth Mwenge, at one of our first RTC conferences, here in Zambia.  She has been a faithful attendee ever since.

Her church called “Steams of Water”, situated in a mining community outside of Mufulira, Zambia, celebrated its sixth anniversary yesterday.  They have purchased the plot of land that you see pictured in this blog.  A temporary structure has been erected until they are able to start building a permanent one.  A roof made of plastic bags, a dirt floor, and crude benches made of rough cuttings from a saw mill, provide a place for people to sit.  Yet, Streams of Water is filled with children, youth, and a number of adults.  In a community gripped by alcohol and prostitution, a giant of a woman is making a difference in the next generation of Zambians. 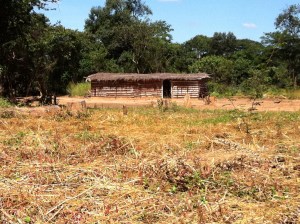 Pastor Ruth shared with me the difficulties and trials of the past six years.  She said, “Pastor Don, I have had to learn to be strong, and I am willing to stand up to anything”.  What keeps her going are the needs of the community and the potential of reaching a young generation for Kingdom purposes.

What a thrill yesterday to see many children and youth raise their hand to accept Jesus as their personal Savior.  It was an even greater thrill to turn the service over to Pastor Ruth and have her lead them through a salvation prayer in the Bemba language. 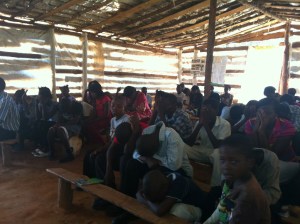 Ruth Mwenge may be short in stature, but she is a spiritual giant!  Thank you Pastor Ruth for reminding me that “big things still come in small packages”!