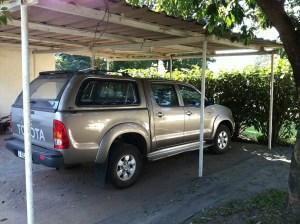 To serve and protect…

The motto “to serve and protect” is used by many police departments across North America.  This weekend, the Zambian Police took it to a whole new level.

Last Thursday, MJ and I travelled to Lusaka.  At one of the Police checks, the officer asked me if I was carrying a fire extinguisher.  Not sure how to answer, I said no and told him I only had a flare.  Holding my breath for his response, he then proceeded to wave me on.  Meanwhile, they had pulled another car over and it appeared they were confiscating his fire extinguisher.

On Friday, during rush hour traffic in Lusaka, a gentleman changed lanes and side swiped my car.  After surveying the damage, I told him to pull over to the side of the road.  Now what do I do?  A police car went by and so I tried to flag the officers down.  When that didn’t work, I ran after them as they had stopped up the road a few hundred meters.  As I returned to my car with one of the officers, two men had put a boot on my tire.  Asking them why they had done so, they told me I was illegally parked, to which I responded that I was getting a Police officer to report an accident.  The Police officer then lit into the one young man suggesting that he needed to have more respect for the Police and to be careful how he talked to an officer.  After the reprimand, I asked that the boot be removed.

On Saturday, I noticed that I was having trouble with noise in my suspension.  After taking the car to a mechanic in Lusaka, who is trusted by some of my fellow Global Workers, I decided to leave my car with him for a few days.  Cheryl Johnston kindly offered her nice Toyota Hilux to us for a few days as she would not need it for the next two weeks.  The only concern she had was that it was not washed and she hoped we would not be embarrassed driving a dirty car.

On Sunday, MJ and I picked up the dirty Hilux and headed for Kitwe.  At one of the Police checks, the officer asked me if I was okay and I responded in the affirmative.  He asked where I was going and then proceeded to say your car is very dirty, you need to wash it!  So, the motto, “to serve and protect” has been taken to a whole new level for me in Zambia this weekend!

By the way, an RTC newsletter will be sent out later this week.  It will have the full story of a potential Chinese church plant here in Zambia!