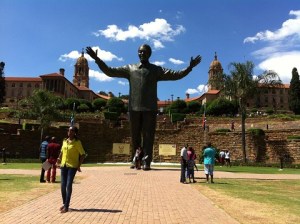 The life of Nelson Mandela is intriguing at the best of times.  To live where he lived and walk where he walked, takes on a whole new dimension.

It has been three weeks since MJ and I arrived in Pretoria.  Almost daily, as we drive to different parts of the city, “Nelson Mandela Drive” becomes the main artery that takes us to our destinations.  On the way to church yesterday, we crossed Madiba Street, the enduring and endearing term of respect used to describe the South African hero.

Friday night was date night.  I took MJ to see “Mandela: Long Walk to Freedom”, followed by some incredible Thai food!  I must confess I found it hard to get an appetite at first as I kept playing the scenes of the movie over in my mind.  How could the supremacy of one minority people group,  be so suppressing over another majority group?  How can anyone as a human being tolerate hatred between races just because of the color of one’s skin?

As I looked around the area where the restaurant was, I saw the beauty of color blindness and my appetite began to return.  Color blindness painted with a peace orchestrated, democracy driven brush, allows blacks and whites to eat in the same restaurants and shop in the same malls. Thank God the back of apartheid has been broken.  Thank God that a man who spent twenty-seven years of his life in prison chose to forgive his captors.  Thank God that peace, not war, brought together a nation that was confused, broken and embittered.

The dismantling of apartheid sounds like Jesus doesn’t it?  He took upon himself the sins of the world.  His body was bruised, pierced, and sacrificed so that the back of sin could be broken.  Red and yellow, black and white, all stand as equals before God.  God does not see the colour of the skin; He sees the broken heart wrapped within the skin, a heart that has been imprisoned by the poison of sin.  And then, God sends His only Son Jesus so that every nation of the world has an opportunity to bow their knee before Him and accept the forgiveness that His love provides.  The long walk to freedom has nothing to do with colour, it has everything to do with forgiveness!!

On Saturday, we went to the Union Building, the seat of parliament here in Pretoria, where just a few weeks before, hundreds of thousands of people gathered to view the body of their beloved “Madiba”.  To some, the ginormous (Don’s new word for a mix of gigantic and enormous) statue of Nelson Mandela on the steps leading up to the Union Building, might feel more like King Nebuchadnezzar’s statue.  To me, it is a reminder of how huge the gift of forgiveness and peace is to the world, and the role that harmony plays in a nation.  How much better off the world would be if we could learn to live together in harmony! 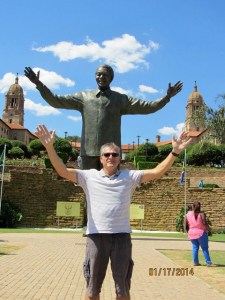