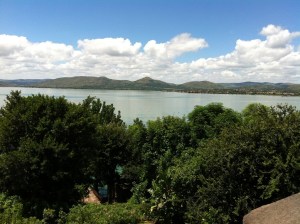 The crest of the hill…

Picture with me a city built in the lush river valleys of the Magaliesberg mountain ranges, one of the oldest mountain ranges in the world, and you have discovered Pretoria.

On Saturday some dear South African friends took us on a drive to the popular Bronkhorstspruit Dam, considered as a popular weekend getaway for many who live in the Pretoria/Johannesburg area.  As we left Pretoria and began to drive up one of the many hills that surround the city, I watched as the deep blue sky on the crest of the hill transformed right before my eyes into a magnificent range of rolling green hills.  I was not prepared for, thinking of, or expecting the beauty that came into view.

Upon our return home, I replayed that scene at the crest of the hill over in my mind a number of times.  I pondered about the journey called life.  Sometimes we face an uphill battle with no sense of what lies ahead at the crest of the hill.  Will the crest reveal the next battle, or will it offer a brief reprise in the form of a downhill valley?  All one can do is hold your breath and hope for the best at the crest.

God has a unique way of giving us unexpected surprises when we least expect it and when we need it the most.  He has a wonderful way of giving us  breath taking, awe inspiring moments that remind us that in the midst of the uphill battle, He is still there.  God’s takes His majestic, creative power that forms mountains, hills and valleys and has a masterful way of turning them into finite moments small enough to ignite our hearts with hope.

MJ and I have a very dear friend facing a real uphill climb with cancer.  Her theme over the last number of months has been captured by two words:  “But God”!  The crest at the top of the hill last Saturday was a “but God” moment.  The climb to the top can be long and tiring, “but God” sometimes reserves His “best for the crest”.