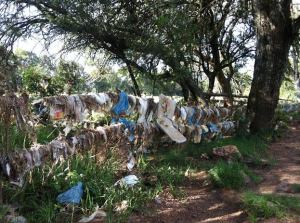 A picture of repentance…

If a picture paints a thousand words, I wonder if I can write five hundred words to describe a picture that does not exist.

A week ago Sunday, I preached on the subject “But God Remembered Noah”.  At the end of the message, I invited those who would like to accept Christ to come to the front of the church for prayer.  Seven people responded to the invitation, but it was the first one who came who created an incredible picture of repentance.

As she walked forward to meet me, instead of facing me, she turned and faced the congregation.  The six who came behind her, followed her example and made an ‘about face’.  At that moment I realized that God had given me a prime opportunity to paint a simple picture of true repentance before the congregation.

Repentance is an ‘about face’.  It is a 180 degree turn from our sin to God’s forgiveness.  The face of the first lady who came to the altar burst forth with an incredible expression of joy.  It was as if a huge burden had been lifted from her shoulders.  That’s the beauty of repentance.

Yesterday, we were invited to take a walk through a dairy farm on the out skirts of Pretoria.  There is a river that flows through the edge of the property.  As we neared the river’s edge, we saw what looked as if someone had neatly hung their clothes to dry.  A closer inspection revealed that what appeared as neatly hung clothes was actually garbage that had been strewn across the property as the result of a severe rain storm that had caused the riverbanks to overflow.

What a picture of sin.  The turbulent waters of sin churn up and expose all the ugly garbage that accumulates in one’s life.  If not cleaned up, it remains strewn for miles and miles, exposing its debris to all of those who walk by.

Here lies the significance of repentance.  Instead of exposing the repulsive debris that sin leaves behind, it gives God the opportunity to clean the garbage that accumulates in our heart.

To those reading this blog today, who are hearing about repentance for the first time, I invite you to do an ‘about face’, turning your back on sin and entering into a personal relationship with God through His loving Son, Jesus.  Let God paint a picture that is worth a thousand words.

For those who have already repented of sin, let today’s blog be a reminder that repentance is accompanied by sanctification.  Sanctification is an ongoing process of garbage collection.  It is a daily cleaning up of debris in our spiritual walk that if left unchecked, will be strewn along the river bank of our life for all to see.  Trust me, based on what I saw yesterday, garbage left uncollected is an ugly site. 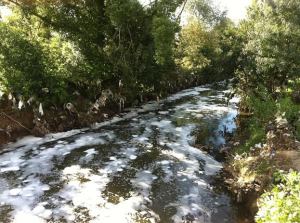