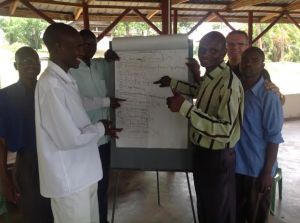 It is not every day that you get to spend time with men who are prepared to sacrifice everything and move to the remotest parts of Africa in an effort to reach out to unreached people groups with the message of Jesus love.  Last week, I had the privilege of spending three days with four such heroes.

Our purpose was to map out a strategy that could be used to develop leaders in a pioneer church amongst unreached people groups.  What a personal thrill it was to interact with these men as they searched the scriptures and unpacked the strategies that Jesus used to develop a team of twelve around His own life and ministry.

RTC is partnering with three churches, in three countries, on three continents to plant a Chinese church in the nation of Zambia.  I will have the privilege of taking the leadership development strategy that was designed in Uganda last week to Asia this week and introduce it to a group of people who are meeting to discuss further steps toward planting a Chinese church on African soil.

We should never be surprised as to how God works.  Four men in Uganda called to reach Muslims and Arabs, work with a Canadian global worker to draft a document that will be used to assist in the development of leaders in a Chinese church plant in Zambia.  That’s what I call a missional church! 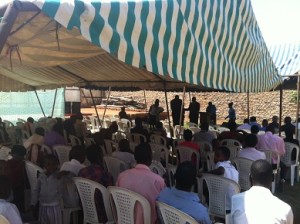 Last Sunday, I was asked to preach at a church outside of Kampala, Uganda.  That same week, a huge rain and wind storm swept through the community.  Five people lost their lives, many homes were damaged, and the church I was in, lost its roof.  National and district leaders accompanied me to the church to encourage the pastor and work with the leadership team to discuss a way forward.  It never ceases to amaze me to watch the resilience of the African people.  They may get knocked down, but they are never defeated.  They experience ongoing hardship and challenges, but their faith grows stronger and stronger.  They are real heroes!!!  The roof was replaced by a tent and the church gathered for worship on Sunday! 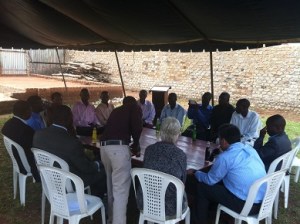