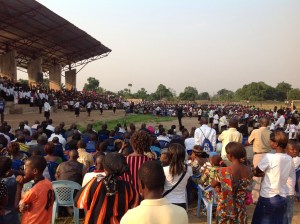 I have just come off an eleven hour road trip that saw us leave Kikwit at 6:15 last night and arrive in Kinshasa at 5:15 this morning. Yes, you read right, the Congolese team I am travelling with thought it better to drive the 650 kilometers in the coolness of the night rather than the heat of the day. So off we went, travelling over mountainous roads infested by broken down trucks and overloaded vehicles carrying ten times their capacity.

Wisdom says I should be sleeping right now, passion says I need to get this blog into the hands of my faithful readers.

Preaching four times over five days and conducting a pastors seminar on integrity were just a part of what God was up to in Kikwit. What I really want to write about is the message that came so strong to my heart as the churches of Kikwit gathered to celebrate Pentecost at the ever so humble football stadium in the heart of the city.

Anyone who has travelled to Africa knows how the people of Africa love to sing, dance and shout before the Lord when they gather for church. Add a Pentecost celebration into the mix, and man can you have church! God gave me a different agenda for Saturday. It all started in the darkness of Friday night. I joined the pastors from around the city to walk the circumference of the stadium and pray for the gathering that would happen the next day. It was during the walk that I learned that just a month before, over sixty people were trampled to death during a concert. My heart was subdued and sobered.

Add to that, the brutal history of a wicked deciver by the name King Leopold II from Belgium. Over a century ago, he declared his rulership over the Congo and from 1885 – 1908, he severed the hands of thousands of men and boys for their laziness toward work, kidnapped and brutally raped many women, burned down villages and exploited the countries resources. The scars of the brokeness, bitterness, hurt, and economic disaster of that period in Congo’s history remain on this country to this very day! 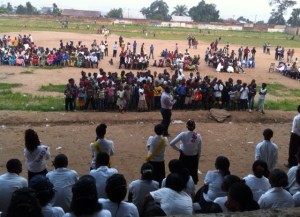 As I was praying Saturday morning, I felt I was to specifically ask God for over sixty people who would give their heart to Jesus at a salvation altar response. The prayer was intensified as I felt God wanted to give spiritual birth to an equal number of people on Saturday as the number who had died such a sensless death just one month before in that same stadium. As you can see from the picture, more than sixty responded. But I noticed that amongst the youth and adults who came forward, there was a sudden surge of young children running to the altar. Just yesterday, I was told that amongst those trampled to death, fifteen were young children as well as a husband and his wife who was expecting a child. Somehow I have to believe that God was reminding the people of Kikwit that in the midst of tragic loss one month ago, He was giving new spiritual birth to people of all ages.

After praying with those who responded to Jesus, I asked people from all over the stadium to come in behind them and pray together for three things:

2) Healing from past hurts

3) Unity in the church

I am not sure if the picture in my blog does justice to what I observed as pastors from across the city came to the front of the stadium and joined hands together while the people of their congregations prayed for unity in the church. God command your blessing upon Your church! 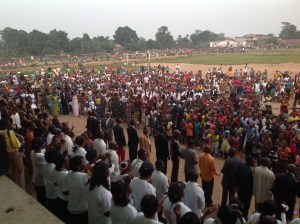 So, I left Kikwit last night praying those same three prayers, not just Kikwit, but for the over ninety million people who call the Democratic Republic of Congo their home!

Now I find myself back in Kinshasa preparing to speak at a pastor’s conference. God please do a work in this capital city!