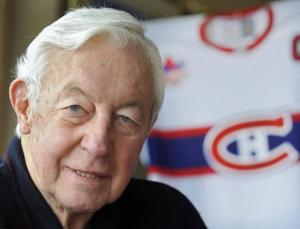 There are times that sports fans unite, no matter how passionate they are about their favourite team. This past week has been one of those occasions.

Two years ago, I was privileged of standing behind Jean Béliveau as we waited in line at the bank. Normally, I would be anxious for the line to move quickly, that day, it moved far too fast, for I was standing behind a hockey legend! In the short time we had, I was able to ask him about his view of the game today and the Montreal Canadiens. I remember little of what he said about the game, but I will always remember having the opportunity to thank him for being such a gentlemen. In genuine humility he thanked me, and with that, our conversation ended as it was his turn to go to the next teller.

Yes I know that , like so many others, I am prone to idolize a great athlete, and yes I know that no one is perfect. But putting these things aside, I have no struggle in writing about a man who is known as a true gentleman. The world could do with a few more gentlemen like Jean Béliveau.

November 22, 1979 marked the 35th anniversary of the loss of my parents in a horrific car accident. To this day, I have people tell me of the impact my parents had on their life. Mom and Dad are not remembered as “superstars” of the ministry, they are remembered as people who loved and cared for other people. Don’t get me wrong, my parents had a very effective ministry, and left an impact whether pastoring in churches, or administrating in a Bible College. But, thirty-five years later, when people talk to me about Mom and Dad, what they remember the most is the fact that they were a genuine lady and gentleman.

I wonder what people will remember about Jean Béliveau, after his funeral on Wednesday? Will they remember the fact that his name appears seventeen times on the Stanley Cup (a record that may never be broken)? Probably. Or perhaps they will remember what he said about his own accomplishments?

“Béliveau cited his first Stanley Cup in 1956 as one of the greatest moments of his career. That was also the year he won the Art Ross Trophy as the NHL’s leading scorer and the Hart Trophy for being the league MVP. He also cited the night he scored his 500th goal with a hat-trick against the Minnesota North Stars on Feb. 11, 1971 as one of the best nights of his career.” (CBC Sports)

Hopefully many of us will remember him, in spite of the accomplishments, for the gentleman he truly was?

“No record book can capture, no image can depict, no statue can convey the grandeur of the remarkable Jean Béliveau, whose elegance and skill on the ice earned the admiration of the hockey world while his humility and humanity away from the rink earned the love of fans everywhere,”

As I look at my own life, I would like to think that, with God’s help, I have had a few accomplishments in ministry. However, as I look at the end of my life, it is my hope that someone will be able to say: “What a gentlemen!”.

With the years I have remaining, I will do all I can to live as a gentleman and a lover of Jesus!