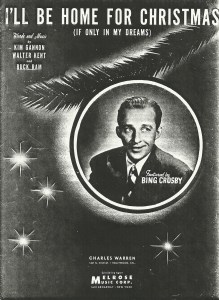 One of my childhood memories, that lingers to this day, is hearing my father and his brother reminisce about their World War II stories. Both of them were stationed in England as Canadian soldiers during the war.

I will never forget Dad talking about being so far away from home for Christmas. His favourite Christmas song during those years became Bing Crosby’s “I’ll Be Home For Christmas”. Since childhood, every time I hear that tune, I think of my Dad, the circumstances that took him away from home, and what must have gone through his mind at Christmas time through four years of war.

During WWII, the McNichlol family in England befriended my father and uncle. Many times they would travel in the darkness of the night (including Christmas) on their Harley Davidson’s to visit the McNicol’s. Manoeuvring the roads of Croydon, with nothing but a small slit on their headlights to illuminate their path, they risked being identified by the enemy. The joy of a little taste of home away from home, outweighed the risks of being discovered by the enemy they were at war against.

In 1977, I had the privilege of travelling with my father to England. We visited the barracks where he lived and worked for four years, and were reunited with his war adopted family. The joy on my father’s face and the laughter that filled the same living room, where many years earlier, he, his brother, and the McNicol family spent many hours, will forever be engraved in the memories of my mind.

The big question remains, where is home?

“I’ll Be Home for Christmas” takes on a whole new meaning for MJ and me this year. We are not at war (with each other or the world), but Christmas 2014 will find us far from family and home. It will be the first time, since our now grown children were born, that we will not be together to celebrate this very special time of the year.

Christmas this year will be celebrated in our adopted country of South Africa that has so graciously opened its doors to us, not our home and native land of Canada. The family around our Christmas table will be void of Stephanie, Jonathan and Julia, our beloved children. Instead, it will include some special friends who are fellow global workers in the PAOC missions family. Together, we will feast on the turkey (small as it is) that is already in the freezer, MJ’s famous French meat pies, and her out of this world, mouth watering, calorie injected sugar pies!!!!

Will we miss our children? Absolutely! Will we be in our home and native land for Christmas? In our dreams! Will we make the best of our Christmas? You can count on it!

So Dad, thank you for helping me to understand where home is. Little did I know, when I heard your war stories all those years ago, that today, “I’ll Be Home for Christmas” would take on a whole new meaning!

Home is not based on your physical address, home is making the best of your situation, wherever you find yourself at any given time, even in the absence of loved ones that you hold so dear.

By the way, I leave for the Democratic Republic of Congo on Saturday to speak at a pastor’s conference. My flight home to South Africa will be Christmas Eve. Pray with me that I’ll be home for Christmas! 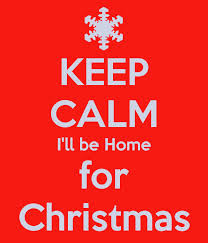