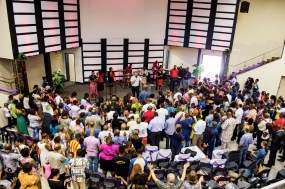 Living in the Present…(Today’s blog is the message I preached at Cornerstone Assembly, Pretoria on Sunday January 4, 2015)

Question: Are you going to let your 2014 problems become your 2015 prison?

1 O my people, hear my teaching;
listen to the words of my mouth.
2 I will open my mouth in parables,
I will utter hidden things, things from of old—
3 what we have heard and known,
what our fathers have told us.
4 We will not hide them from their children;
we will tell the next generation
the praiseworthy deeds of the Lord,
his power, and the wonders he has done.

In this Psalm, Asaph reviews the stubbornness and unfaithfulness of Israel’s past

In spite of deliverance from Egypt, the dividing of the Red Sea, the provision of water, manna and meat in the desert, the Psalmist says that “again and again”, the children of Israel “put God to the test”!!

vs. 32, 37 & 42
“In spite of His wonders, they did not believe…Their hearts were not loyal to Him…They did not remember His power”

Asaph was not encouraging people to live in the past, he was remembering the past so that the next generation would learn to live in God’s power that was available to them in the present

Living in the past

Compares the present to the past, “things are not the way they used to be”
Evaluates today’s success based on yesterday’s glory
Diminishes God’s power to a historical memory rather than a present reality

Book of Ezra (living in the past)

Book of Haggai (living for the present)

Upon their return, their first priority was to rebuild the altar and the Temple

Following the rebuilding of the altar, they began to rebuild the temple that had been destroyed by the Babylonians

10 When the builders laid the foundation of the temple of the Lord, the priests in their vestments and with trumpets, and the Levites (the sons of Asaph) with cymbals, took their places to praise the Lord, as prescribed by David king of Israel. 11 With praise and thanksgiving they sang to the Lord:
“He is good;
his love to Israel endures forever.”
And all the people gave a great shout of praise to the Lord, because the foundation of the house of the Lord was laid. 12 But many of the older priests and Levites and family heads, who had seen the former temple, wept aloud when they saw the foundation of this temple being laid, while many others shouted for joy. 13 No one could distinguish the sound of the shouts of joy from the sound of weeping, because the people made so much noise. And the sound was heard far away.

Those who remembered the size, silver, and gold grandeur of the original Temple, wept aloud because “things were not the way they used to be”

“Who of you is left who saw this house in it’s former glory? How does it look to you now? Does it not seem to you like nothing?”

Meanwhile, the next generation who had never seen Solomon’s Temple were overwhelmed with shouts of joy at the rebuilding of the temple

The mixture of emotions led to a strange sound that could be heard far away and should be a caution to the church today!

They want to see God’s power manifested in the present!

Living in the past, reduces God’s power to a confusing noise in the present

Despite His sovereignty, living in the past can put God’s ability to act in the present at risk

5 ‘This is what I covenanted with you when you came out of Egypt. And my Spirit remains among you. Do not fear.’
6 “This is what the Lord Almighty says: ‘In a little while I will once more shake the heavens and the earth, the sea and the dry land. 7 I will shake all nations, and the desired of all nations will come, and I will fill this house with glory,’ says the Lord Almighty.

Even if our actions delay or frustrate God’s plans, His Spirit is still amongst us!!!!

God said through His prophet Haggai that “in a little while” He would once more shake the nations of the world with the arrival of His Son – Jesus!!!

“I tell you that One greater than the temple is here.”

26 At that time his voice shook the earth, but now he has promised, “Once more I will shake not only the earth but also the heavens.” 27 The words “once more” indicate the removing of what can be shaken—that is, created things—so that what cannot be shaken may remain.
28 Therefore, since we are receiving a kingdom that cannot be shaken, let us be thankful, and so worship God acceptably with reverence and awe…”

As we begin 2015, I encourage you to put your trust in Jesus Christ, not in created things that will be shaken

For the old priests, Levites and family heads of Israel who wept when they saw the inferiority of the new temple, the glory of created things had been shaken!

When we trust the glory of Jesus, we are receiving a Kingdom that cannot be shaken!

Things all around your life may crumble, but Jesus, the One who is greater than the temple, will remain!

1) Turn your eyes on Jesus and away from your problems

2) Remember the past as a gateway to God’s power in the present, not as a place to live

3) Determine that this present house will be filled with the power of the Holy Spirit and the glory of Jesus Christ!