There may be some of my readers who have heard me share the teamwork lessons that I learned from a group of fishermen in Mombasa, Kenya.

Every day, these men go out on the Indian Ocean to cast their nets, returning home mid-afternoon. On the day that MJ and I took pictures of them, their catch was very small. It caused me to question why they would go out day after day from early morning to mid afternoon for such a small catch. My conclusion? Today, maybe today, would be the big catch.

Well, last week a group of South African fishermen in the Atlantic Ocean, proved my point. I noticed a large group of people gathering on the beach. As always, my curiosity got the best of me and I went to see what all the fuss was about. Hundreds of yellow tail fish had been hauled in by a team of fishermen. 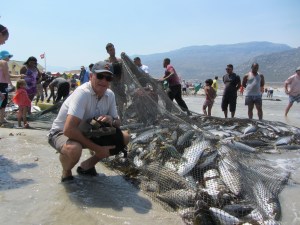 Other than the fact that they were fishing in different oceans, there was little difference between the fishermen from Kenya and those from South Africa. Their boats were man powered and had to be paddled away from the shore, the team who hauled in the net were of a similar number, and the salt content of the water and the rough waves were the same. The difference last week, was that these fishermen were in the right place at the right time and happened to benefit from a large school of yellow tails.

What a life lesson for all of us. Never, never, never give up. It may seem that you work hard and never get ahead. Maybe you pray hard and it seems your prayers go unanswered. These fishermen, whether in Kenya or in South Africa, remind us that if we are faithful to what we are called to do, at just the right time, you will be in the right place for God to answer in a big way.